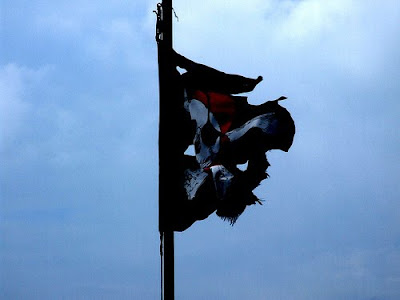 Last year, as part of Hastings Carnival Week, the Old Town held a pirate day. It was an absolutely huge success and the streets in the Old Town were full of swashbucklers and much fun was had by all! So, this year, on Friday 6th August will be the second Pirate Day in Hastings Old Town, and to make it bigger and better, the organisers are going for a world record. Yup! The Guinness world record for the most amount of pirates in one place (currently at around 1700 people). 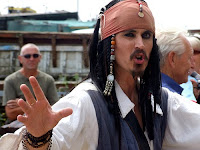 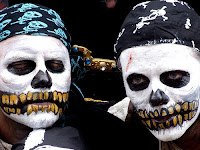 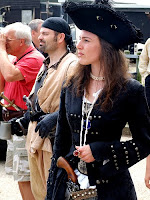 Last year Captain Jack Sparrow, Captain Barbosa and Will Turner re-enacted scenes from Pirates of the Caribbean with sword fights and all, and they will be back again this year. There will be children's entertainment in George Street including: hair braiding, face painting, treasure hunting and musicians. 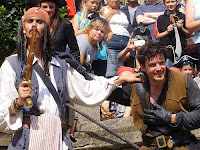 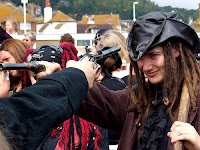 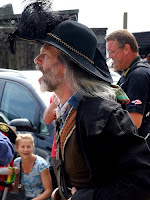 At 1pm follow the sound of the drums to the beach where the Guinness World Record attempt will take place by the Lifeboat house. Followed by the pirate procession at 2pm that starts at the lifeboat house, finishing up at the end of the High street, led by Captain Jack Sparrow, Captain Barbosa, Will Turner and Elizabeth Swan. After the procession there will be a piratical barbecue accompanied by sea shanties. Needless to say, the Pirate Day will be the highlight of Carnival week and I cannot urge you all enough to don your best eye-patches, swords, pistols, tricorn hats, bandanas and parrots and get yourself into Hastings Old Town and join in with the piratey fun!
So, no matter who you are, no matter where you are...
on Friday 6th August...
You are a pirate!
Posted by Abbie at 12:47

Best post ever, can't wait. Can davida and I come down to the caves for a tattoo towards the end of the day?

Best post ever, can't wait. Can davida and I come down to the caves for a tattoo towards the end of the day?

Well my dear, I'm actually at the castle that day! however, I will make sure I take the face painting stuff with me so that I can tattoo you all :D so excited! Wish I wasn't working but ho hum...

It really is! It was great last year, if you are anywhere near Hastings on Friday I suggest you don your pirate gear and join in with the fun! :)