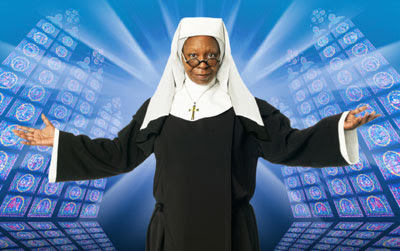 This week, on Tuesday, Me and my sisters were fortunate enough to get tickets to see Sister Act at the Paladium starring THE Whoopi Goldberg! She was only starring as Mother Superior for a limited time only, for three weeks, and the whole theatre was packed out! The atmosphere was absolutely fantastic and the show was outstanding! I heartily recommend you go and see it! I was smiling like a maniac throughout the whole show and I left the Paladium singing the tunes, and spent the train journey home with them firmly stuck in my head! 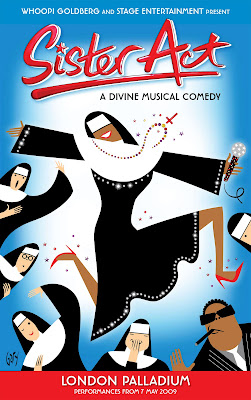 I can honestly say that every single member of the cast were brilliant! I wish I had bought the programme so I could tell you how fabulous each and every one of them were, but instead I'll just have to give you a brief overview (after all I don't want to spoil it for those of you who havn't seen it!). Simon Webb played the role of "Shank" he was surprisingly great! I didn't know quite what to expect, but he was great, he sang well and provided comedy too. Sister Mary Lazerus was hilarious, as were the rest of the nuns. Deloris Van Cartier, blew me away! She was brilliant! If I didn't already know, I would never have guessed that she was the "stand in", definitely a star in the making! 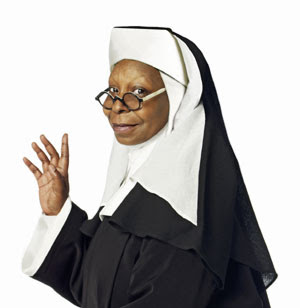 Naturally, one of the highlights of the show was the amazing Whoopi Goldberg! Me and my sisters were saying how surreal it was to be actually seeing her in the flesh! We loved the Sister Act films and Whoopi starred in so many of my favourite films from my childhood that we were all so excited about the show. Whoopi came on stage first for a small part of narration, and she couldnt speak for a solid 5mins due to the applause and whooping! The atmosphere in the theatre was truly amazing and needless to say the show was finished off with a standing ovation from the whole audience. 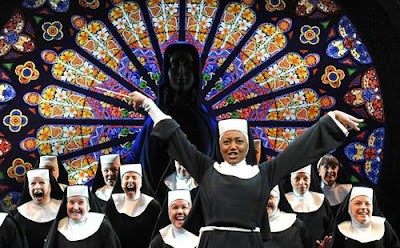 The original score was written by Alan Menken, whose credits inclue, Little Shop of Horrors, The Little Mermaid, Beauty and the Beast, and Enchanted, all of which are favourites of mine!

The only thing that remains to be said is that you simply MUST see this show! They are booking up until 30th October at the moment due to the big move to Broadway, so go get your tickets now!
Posted by Abbie at 12:38