The Pipettes Vs Hoxton Square Bar and Kitchen!

The Pipettes are back! They have ditched the 50's inspired sound and polka dots for a more 80's disco feel... but that doesn't make me love them any less (if anything, I love them more now)! They still have the fun, pop songs that make you want to dance. Their new single Stop The Music and Our Love Was Saved By Spacemen are brilliant, catchy and fun... I couldn't help but dance and sing along. When it is released I will be first in line for the long awaited second album: Earth Vs The Pipettes, and if you like disco-pop songs that make you want to dance then I suggest you do the same... Earth look out! Here come The Pipettes! 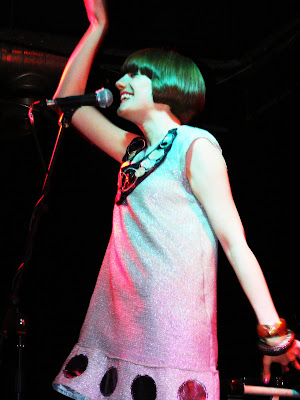 Ani - I love her dress. Fits in with the space theme nicely. 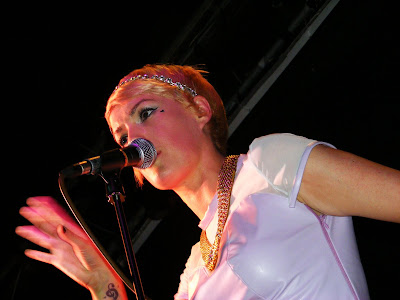 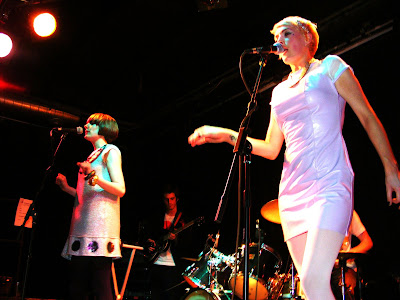 Pulling Shapes... The ladies didn't disappoint and I was up joining them in no time! 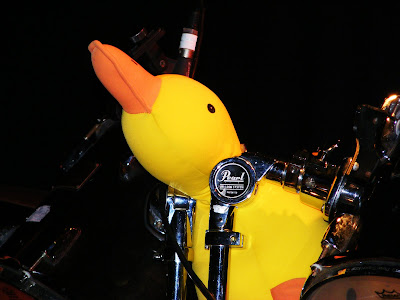 Colin, the mascot for the gig. 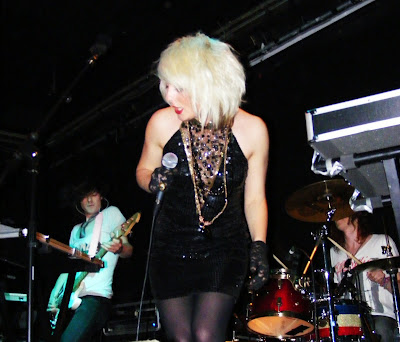 There were two support bands, Angry Vs The Bear was one of them (or Angry Vs The Hair from the sheer volume of the do's they were sporting!). Described as "frantic, noisy, fizzy electro pop punk", they were very good, but a lot of their songs sounded very similar to the next one and the one before it. But overall, definitely worth a listen. 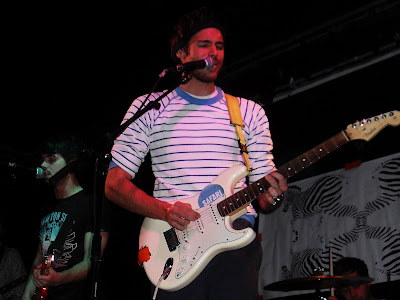 The first support band were Safari, and I have been desperately trying to locate their Myspace, Twitter, website... anything, but to no avail! which is such a shame, because I thought they were absolutely brilliant! I will definitely be keeping an eye out for them when they start releasing material, and if anyone can find a link for me that would be fantastic. Every song had a slightly different sound to it, quirky lyrics, and were something that I would consider buying to add to my music collection.
Posted by Abbie at 13:48

Email ThisBlogThis!Share to TwitterShare to FacebookShare to Pinterest
Labels: Angry Vs the Bear, bands, Earth Vs The Pipettes, gigs, Hoxton Square Bar and Kitchen, new album, Safari, The Pipettes

Managed to find a link to Safari! http://www.myspace.com/thisissafari
Very impressed with both support bands and even more so with the Pipettes :-)
x

I have found a myspace page for safari!
http://www.myspace.com/thisissafari

very impressed with both support bands, but even more so with the pipettes :-)
x

Hi Abbie, apologies for the somewhat spammy comment but I'm running a comp over at my blog (fadedglamour.co.uk) to win tickets to see The Pipettes in action at The JD Set, where they'll be covering tracks from The Human League's 'Dare' album. Hope you decide to enter, you have a high chance of winning!

I saw Safari Play in Guilford not long ago and loved them also..

I had some banter with them so i have thier links..

Yo Abbie.
This be safari!

As you described, it is a difficult search for us.
But no need to worry, we have found you. ha!

Thanks for coming and thanks for your review!

http://www.facebook.com/home.php?#!/thisissafari?ref=ts
should be something for you there pal

Was at Hoxton too. Saw this on Facebook. Pipettes were great weren't they?!

Anyway here's a Myspace link to Safari. Thought they were good as well.

Hope they turn out successful in the future too.

Thanks for the links everyone, the gig was great wasn't it!?

HiAbbie how are you doing?..I have visited your blog..it is really impressive good work!!